_____
The Mayor’s Operations Innovation Team is a partnership between the Office of the Mayor, the Mayor’s Fund for Los Angeles, and the L.A. Coalition for the Economy and Jobs to improve the City’s business systems and operational efficiency.

I was proud to be a part of this ambitious project help the Los Angeles City improve the Workers Compensation process and reduce its costs. 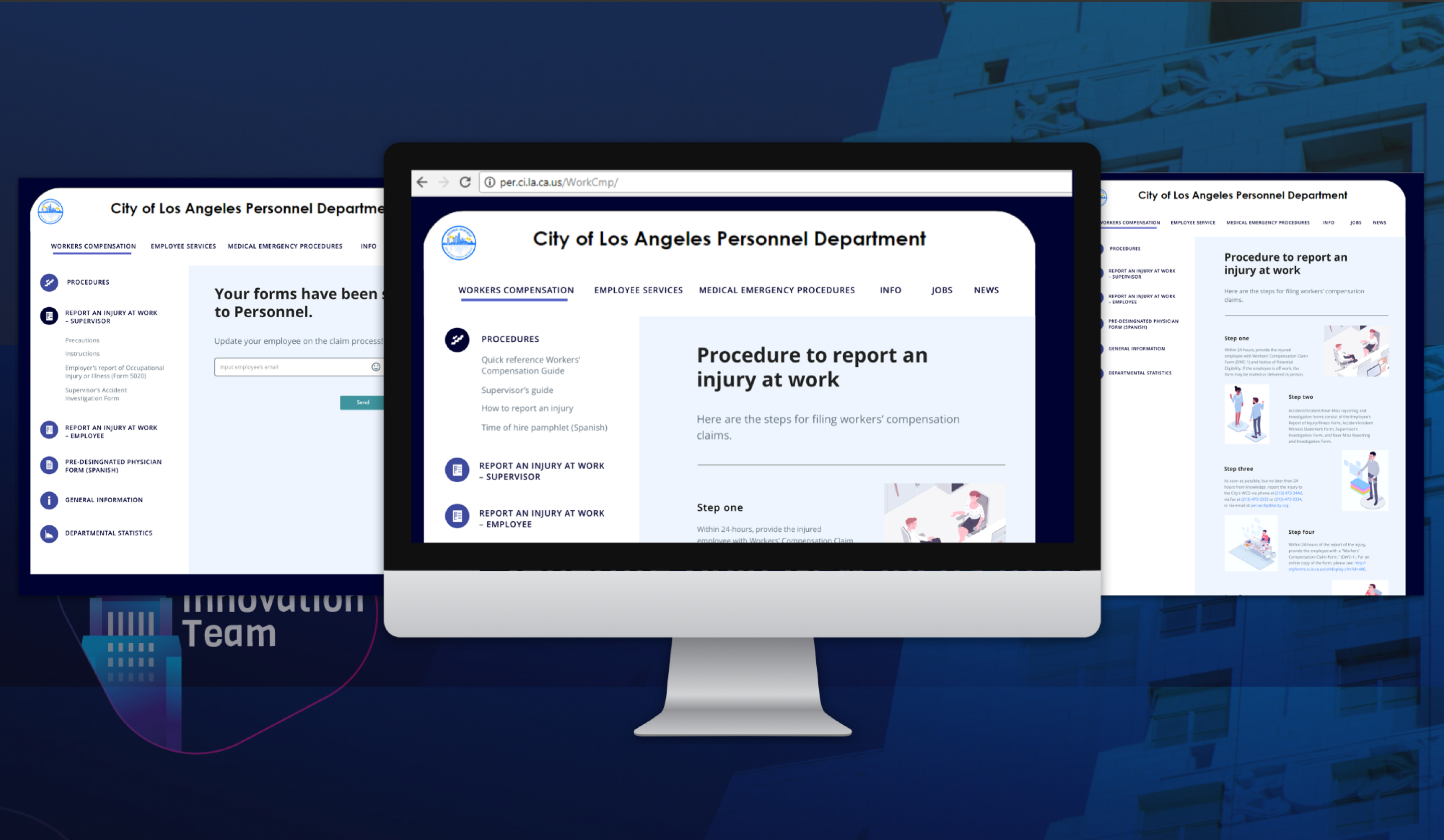 a bit of background

The city is fined when the State finds late or incomplete forms. This, along with the fact that employees will move to litigation if care isn’t given on time, has been a monetary consequence due to inefficiencies in the processes.
In response, the operation Innovations Team declared a long-term project to improve the dilemma. As part of this project, me and my team set out to investigate the current system and to facilitate a long-term program which would contribute to a revamp of City employees' compensation experience and increase City's saving.

Tackling system issues in a month.

We were presented with 2 underlying problems, which stemmed from the supervisor role:

I designed of the online claim filing experience, which includes the redesign of the City of Los Angeles Personnel Department website architecture and the admin Workers Compensation Screens.

I also redesigned the Workers Compensation website structure as well as the Supervisor Investigation Form.

I was the Researcher, Information Architect, UI and Visual Designer. Meanwhile, I worked alongside two Researchers.

What is the system?

Because it was such a complex and dynamic system, it was important to us to understand the systematic context before attempting to solve isolated problems. Our goal was to identify:

1.   How different entities of the system interact with each other.
2.  How data flow among different components of the system.
3.  Different data management and processing models in different departments.
To study the system, we interviewed elective officials and the creator of the iVOS at the Personnel Department and identified the process end to end for when an employee gets injured to the point which the forms are turned in.

At the same time, me and my team evaluated current Workers Compensation Form Instructions, training material and the interface of the supervisors’ online form submission portal. Comparing to other models on the market, lots of problematic areas came to our concern. 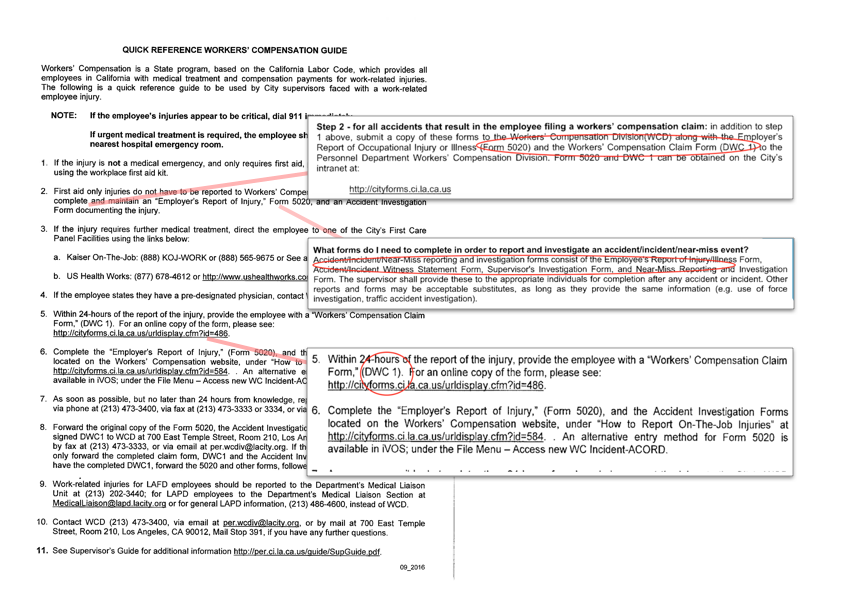 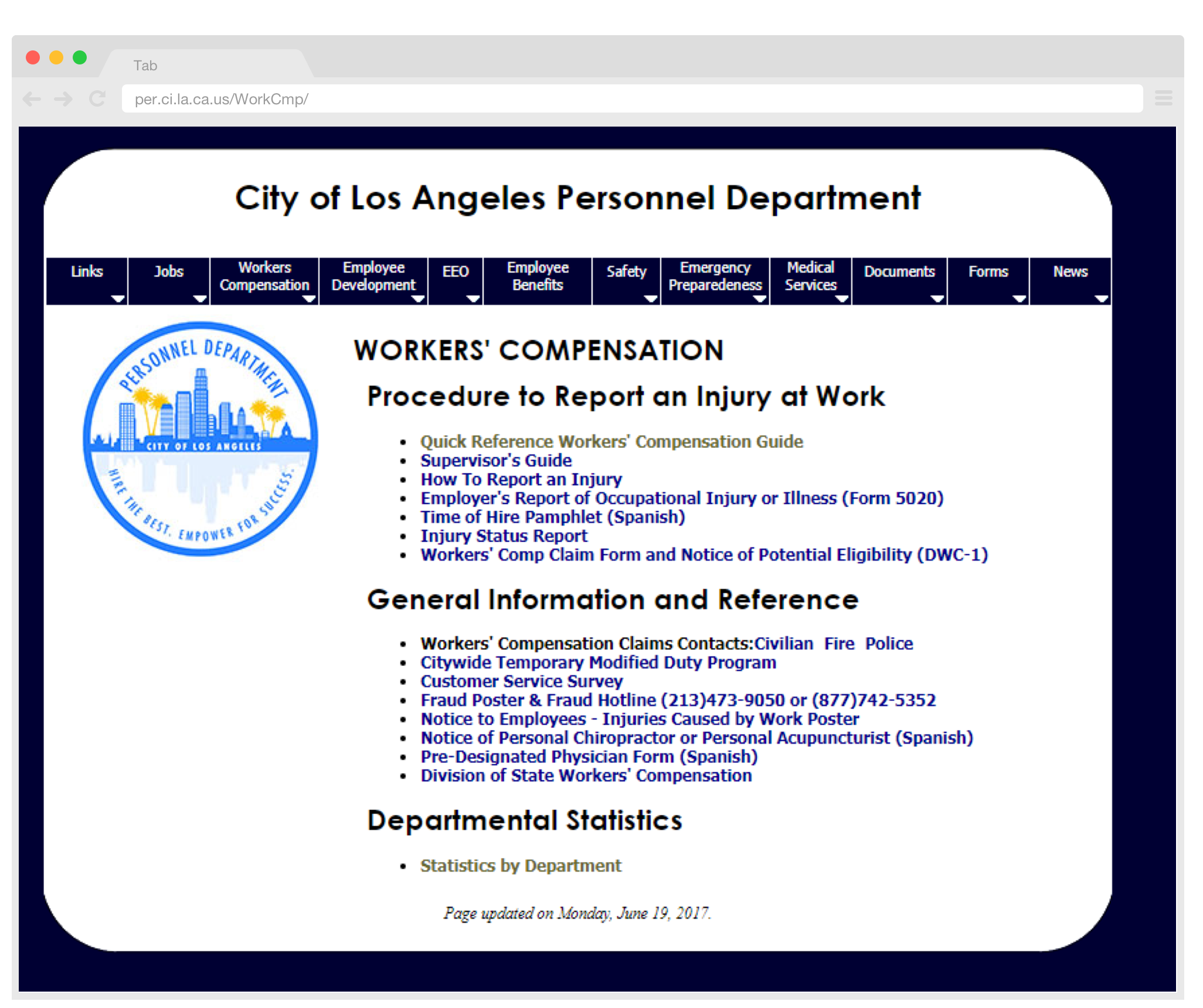 One rabbit hole at a time.

Based on our data, the inefficiency came from the supervisors. To find inefficiencies in each segment of the process, we interviewed indexer, analyst and supervisor coordinator, supervisor trainer and people who are in charge of iVOS. They all had a smooth claim filing or processing process.

Departments Interview Results - The Good and the Bad
The Department of Sworn Services (LAPD, Fire Dept, etc.) is the best about getting the forms in properly and the Department of Parks and Recreation is the worst. So we shifted our focus to supervisors as the assumed users.

LAPD: Training is the key to success.

We started our inquiry with Sworn Services and see what they were doing right. Not all supervisors were unmotivated to serve the city – Upon being trained, they become far more invested in getting the forms completed in time.

However, they aren’t clear on the process to follow until receiving the training program, which in fact, does not cover every supervisor.

This validated the need for training across all departments. And instead of the 5020 form, the Supervisor Investigation Form was the problematic one to fill out.
________________

"There is no place on the form to indicate when a supervisor isn’t present for an incident."

The Problem Child - Parks And Rec.

It was time to address the department with the highest rate of incomplete and tardy forms. Upon speaking to another coordinator, we discovered:

‌a.  Many workers work exclusively in the field and don’t have computers to access the forms, let alone know how to access them.‌
b.  Certain supervisors often sit on the forms due to poor work ethic, leading the injured employee to seek resolutions via litigation.‌
c.  Disciplinary protocols are outlined for supervisors that fail to fill out forms but are never enforced.
________________

"No disciplinary actions are taken against consistently problematic supervisors."

Trust issues within the system.

We were surprised by the findings. Although the inconsistent and ineffective training was a big part of the problem –  Major causes were human error and the lack of unity in the system – false claims, the delay of form submission, paper submissions, etc. 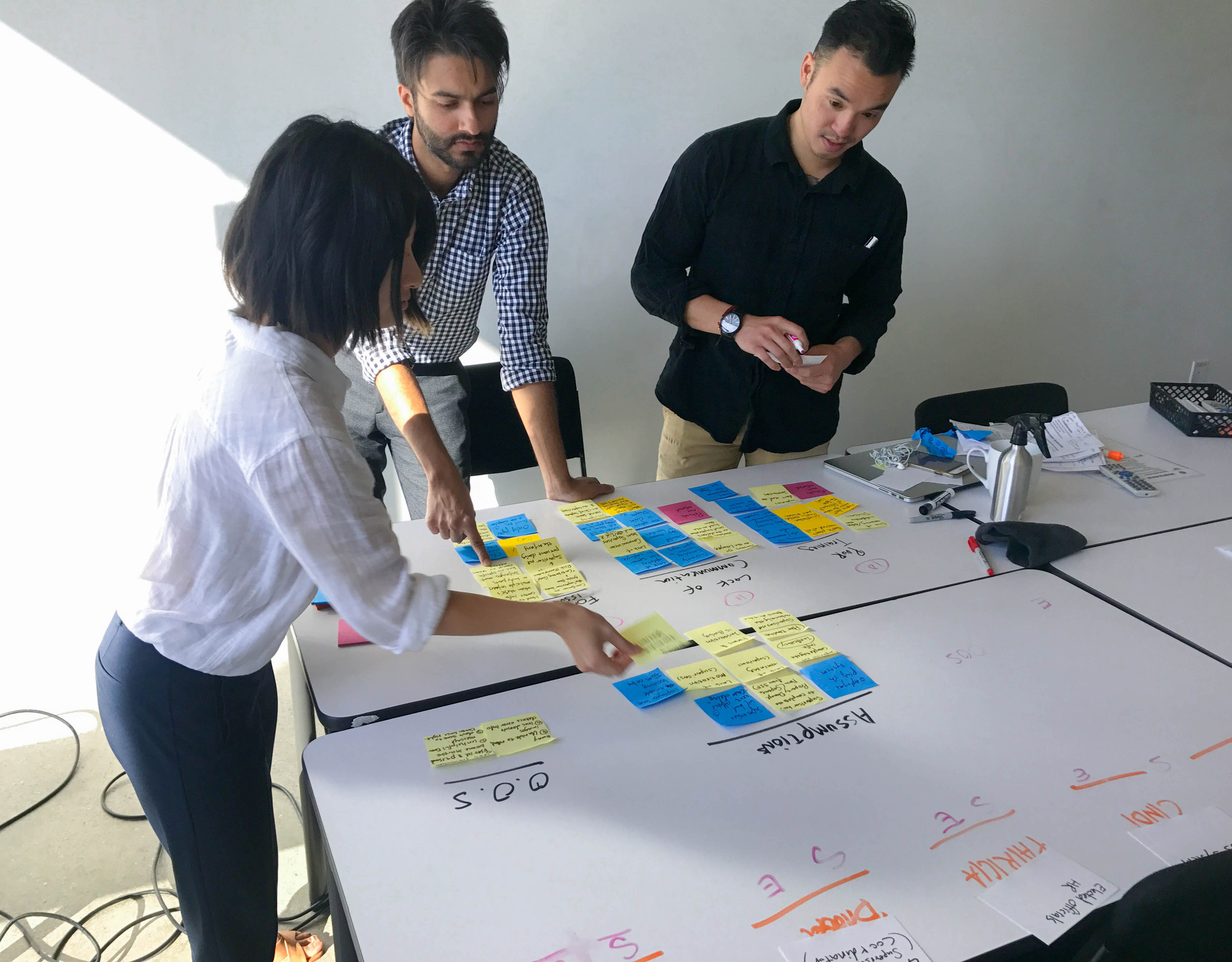 And it all comes down to human skepticism and the mistrust in the system. However, these big problems were out of scope within our time frame.

Our challenges came up:

1. How do we define project scope and then stay within scope during the three-week period?
2. How do we create design that best improves the overall infrastructure when different departments operate completely differently?

Scoping the problem and evaluating our approach.

These questions helped us find the project scope and define our end goals for the one-month period:

Since the iVOS system and state forms (not including the instructions section) could not be changed, and high turnover rate and work ethics (bigger problems) require more time to tackle, our data informed us that form and training issues should be our focus.

We explored different approaches to unify the training and claim filing process. Working with the time constrain, we compared the pros and cons of each approach and settled on deliverables.

Focusing on workflow optimization and content usability, the redesign is a training and a form filing tool which speeds up user's on-boarding process and claim filing tasks.

Concept and visual design by me. Content audit by Tikku.

I used the audited training materials and redesigned the claim-filing instruction in a way that optimizes memorability and comprehension.

My visual design goals for the interface were:
a.  Clean and easy to navigate
b.  Clear on how the information is laid out
c.  Increases user satisfaction and excitement

A UI Tool Kit was also created for the site.

Concept and visual design by me.

The dynamic left navigation bar accommodates both new and experienced supervisor by sectioning off information and providing shortcuts to quickly navigate and find the content they need.

Concept and visual design by me.

Saving your work and report to the employee.

Workers Compensation page now allows user to save their work, which saves their time of refilling the forms and minimize their stress level. The supervisor will also report their progress to the employee so both parties will make sure the claim is submitted on time.

I condensed and reorganized the online content and created a clearer information hierarchy which orients the user to where they want to go.

The City's Workers Compensation Site Map design by me.

Based on our research, I added “Supervisor Not Present” check box and Supervisor’s Notes section. This allows them to inform the indexer on the reasons why they left certain sections blank. This feature cuts down the wasted investigation time. 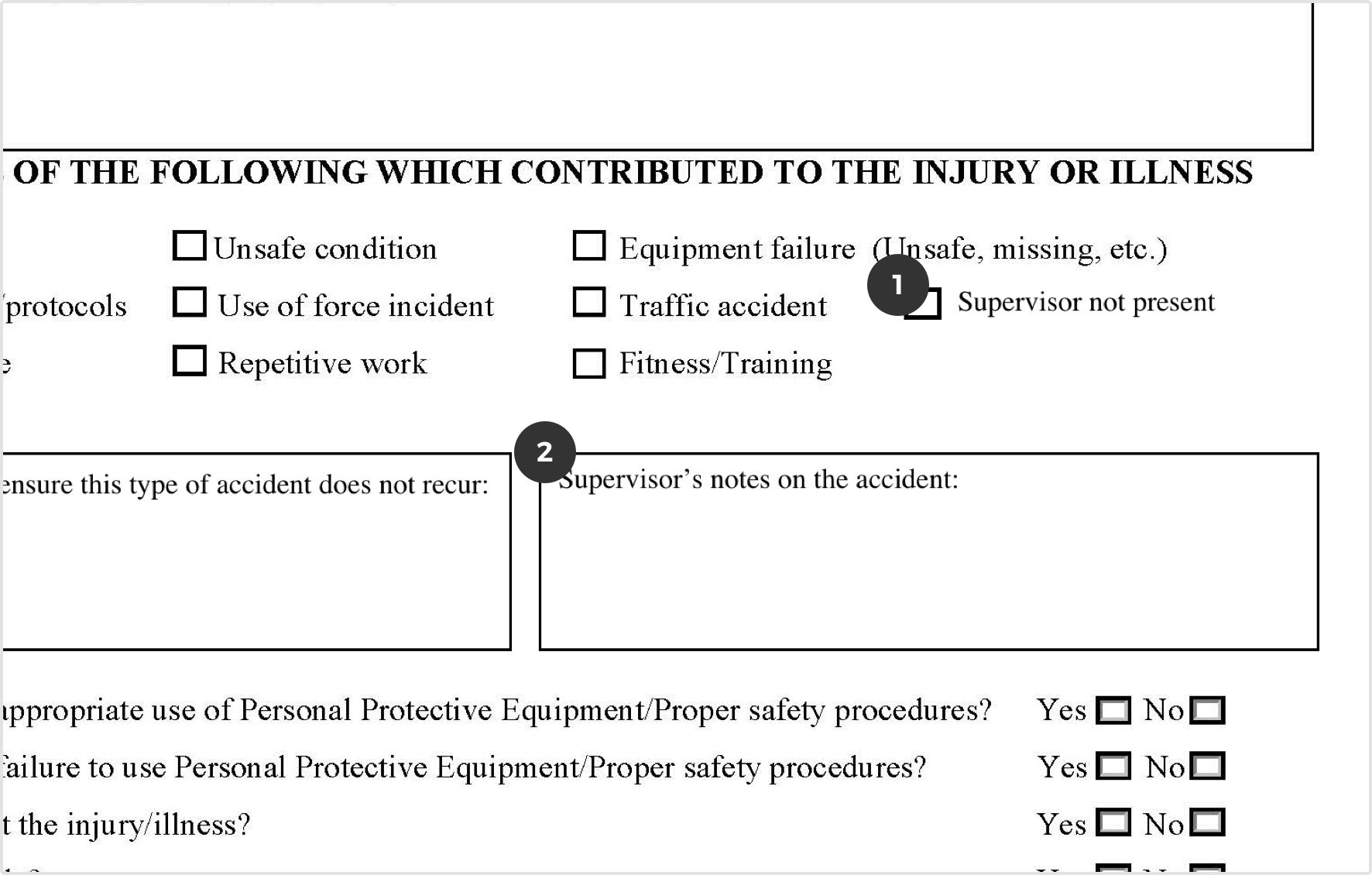 Supervisor Investigation Form redesign by me. 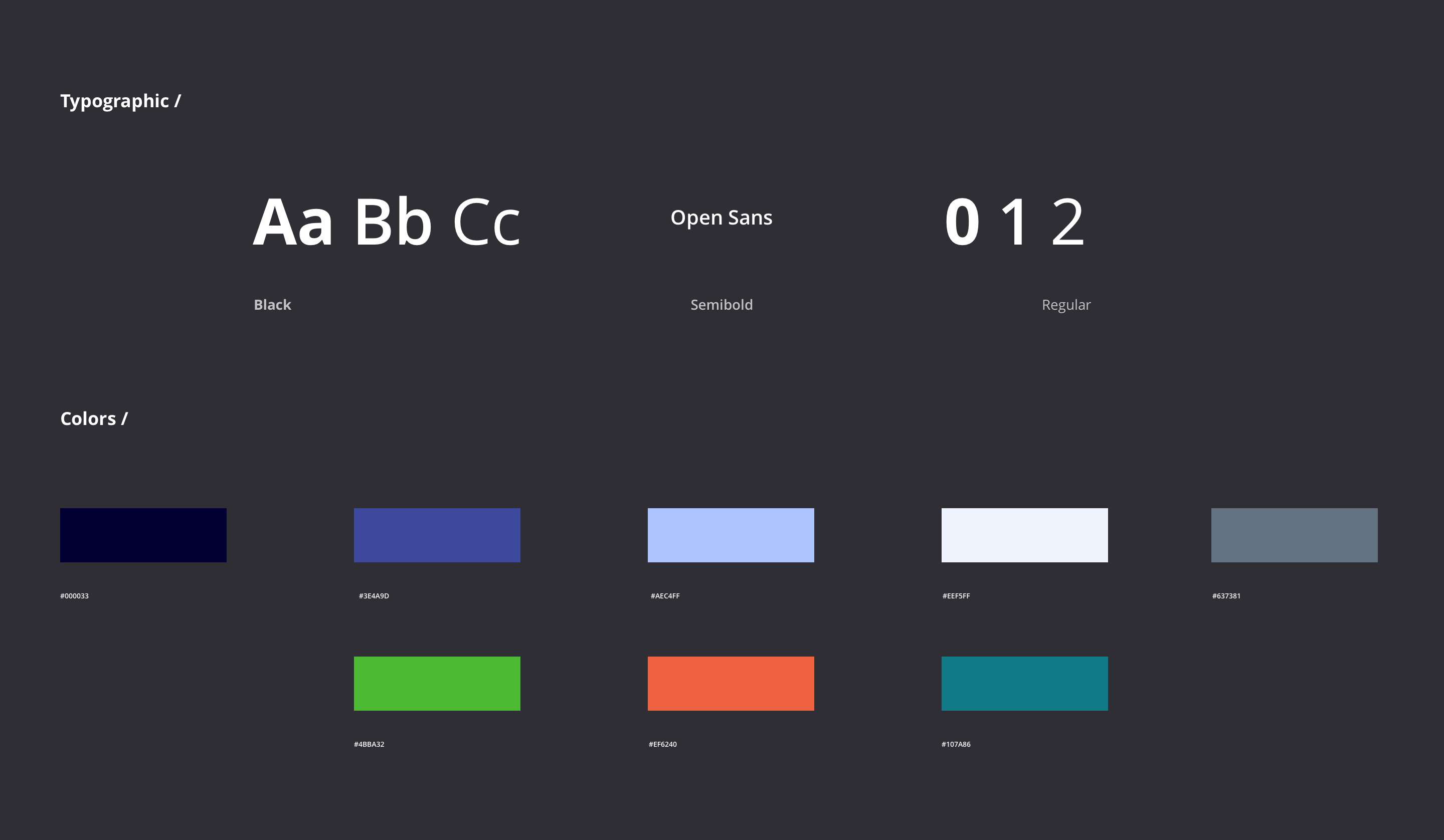 We provided our clients with two findings briefs with current training material analysis and a proposal for what we would do for the next phase. We recommended the following:

Next phase proposal break-down
Even though this was a short project, I was excited to be part of this journey and had an impact on the workers compensation experience.
Next
Lowe's App –– Innovation through Home Renovation